Welding and Completion: The Beast Lives

Over a year ago I built a custom mountain bike frame from metal tubes to design to completion, but never finished writing about it. This is part three, when we finally welded it together.

Labor Day weekend Paul and I drove to Binghamton for the first of two welding sessions. The colossal amount of work, combined with my jig design necessitated two visits, the first of which would finish the front triangle and weld the chainstays and seatstays as separate assemblies.

Before any welding occurred, Paul brazed on the four water bottle bosses as well as my custom cut dropper post outlet. Brazing essentially entails coating the area in flux, heating the tube up until it’s obscenely hot and then touching silver to the joint and letting it flow. It’s impressive to watch. 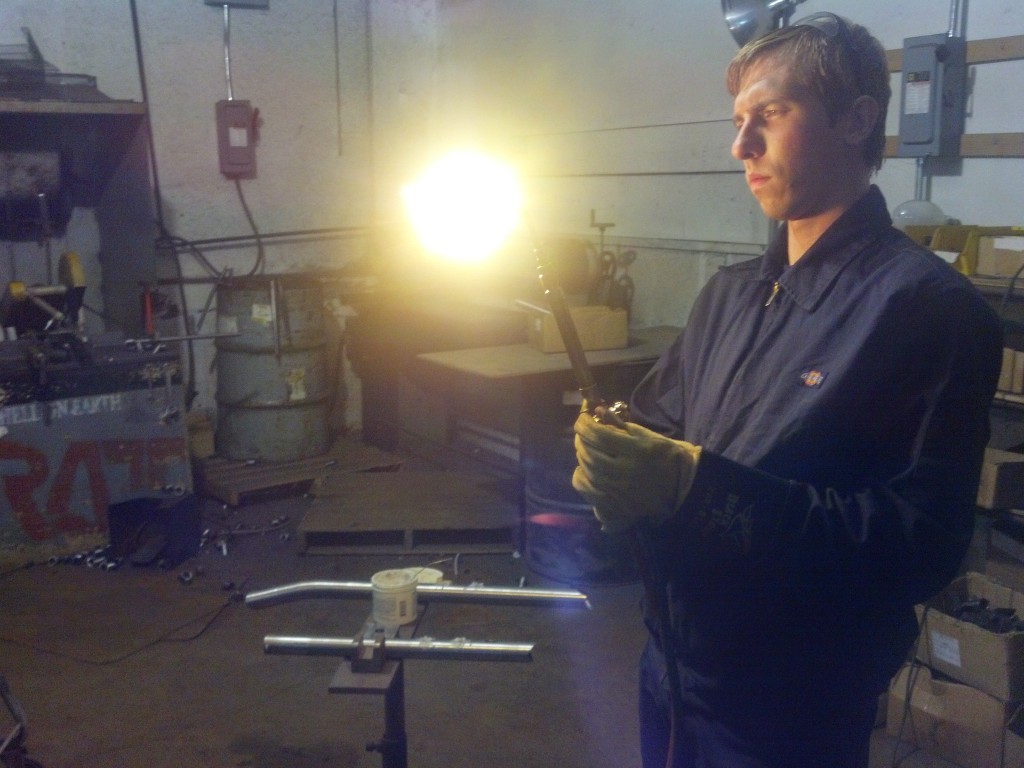 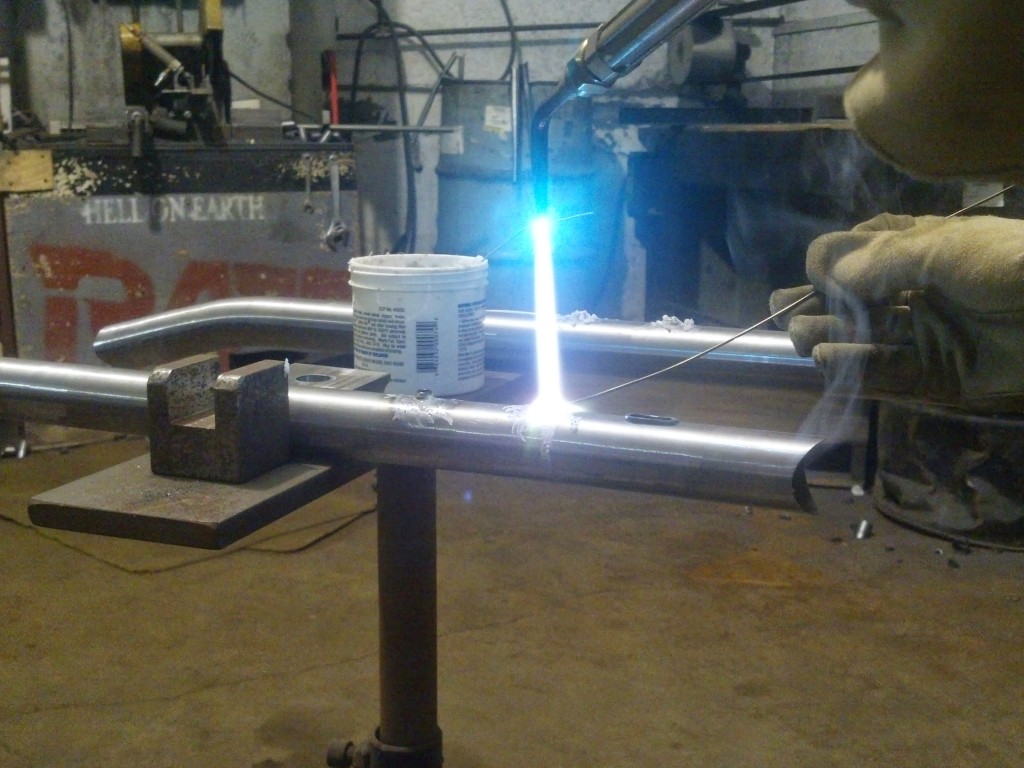 Next we cleaned the tubes, placed them back in the jig and began tack welding the main triangle. 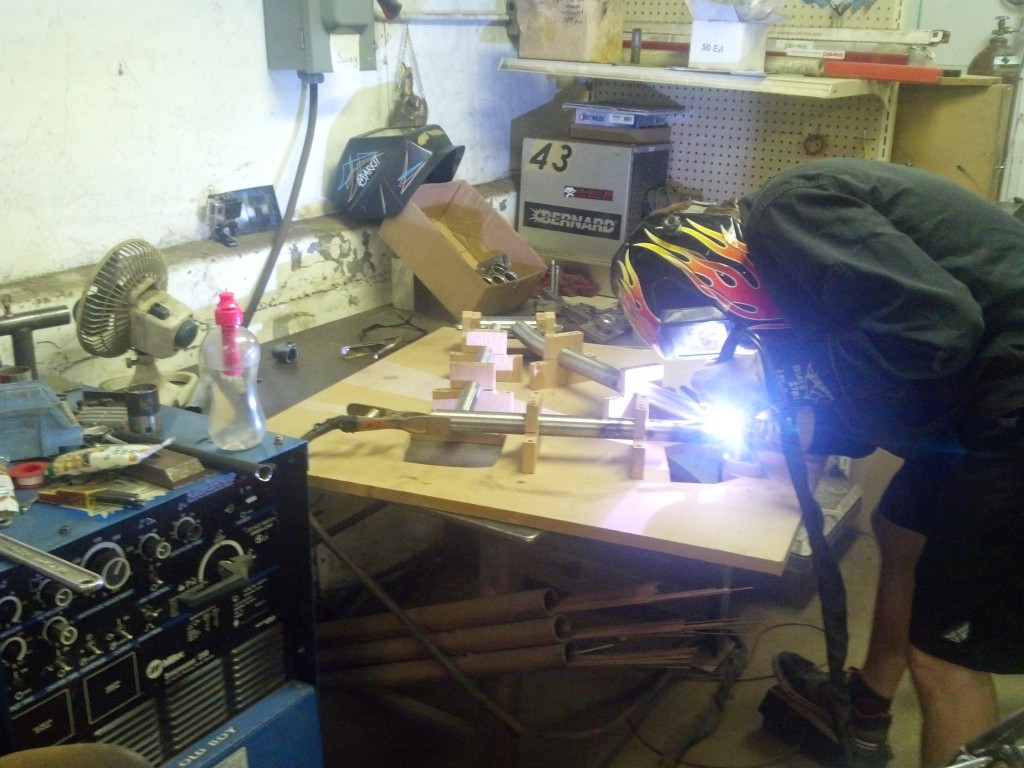 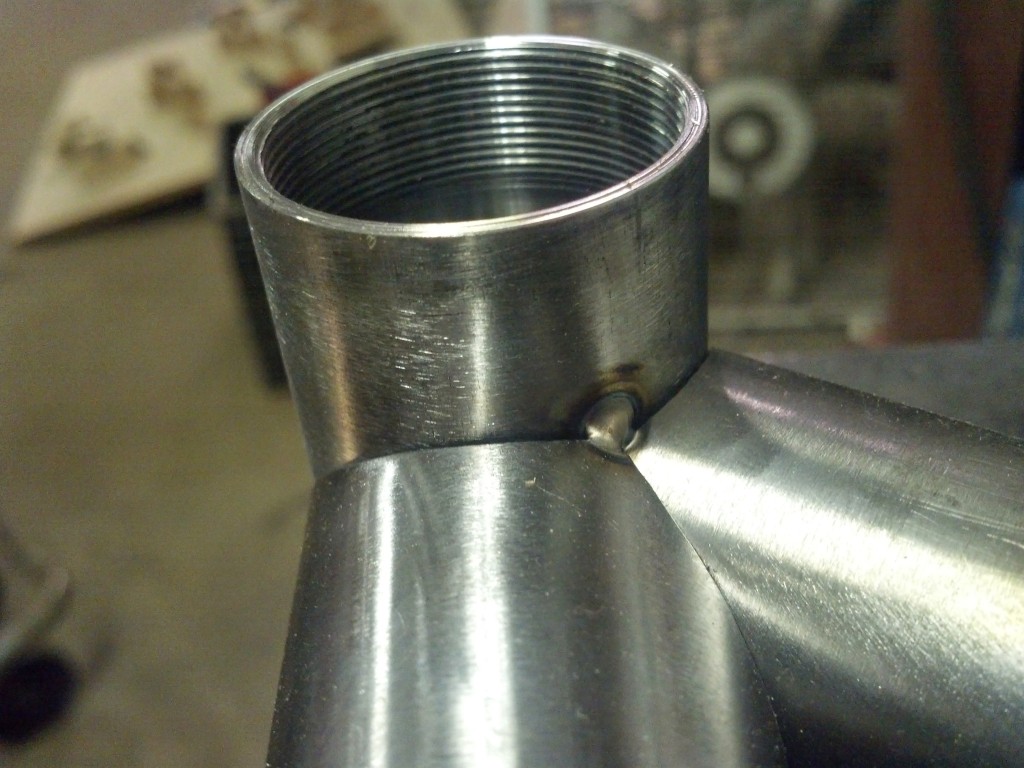 Then the seat tube. 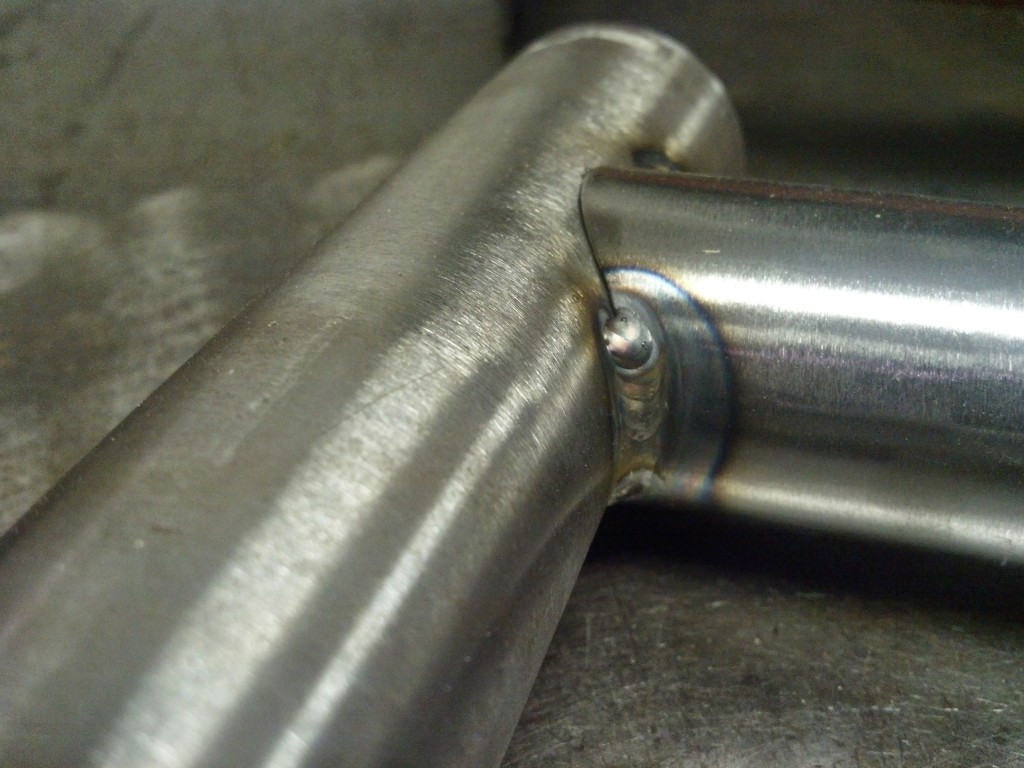 Next the head tube (no photos as I was busy assisting). Then we removed the frame from the jig and Paul began to complete the welds. 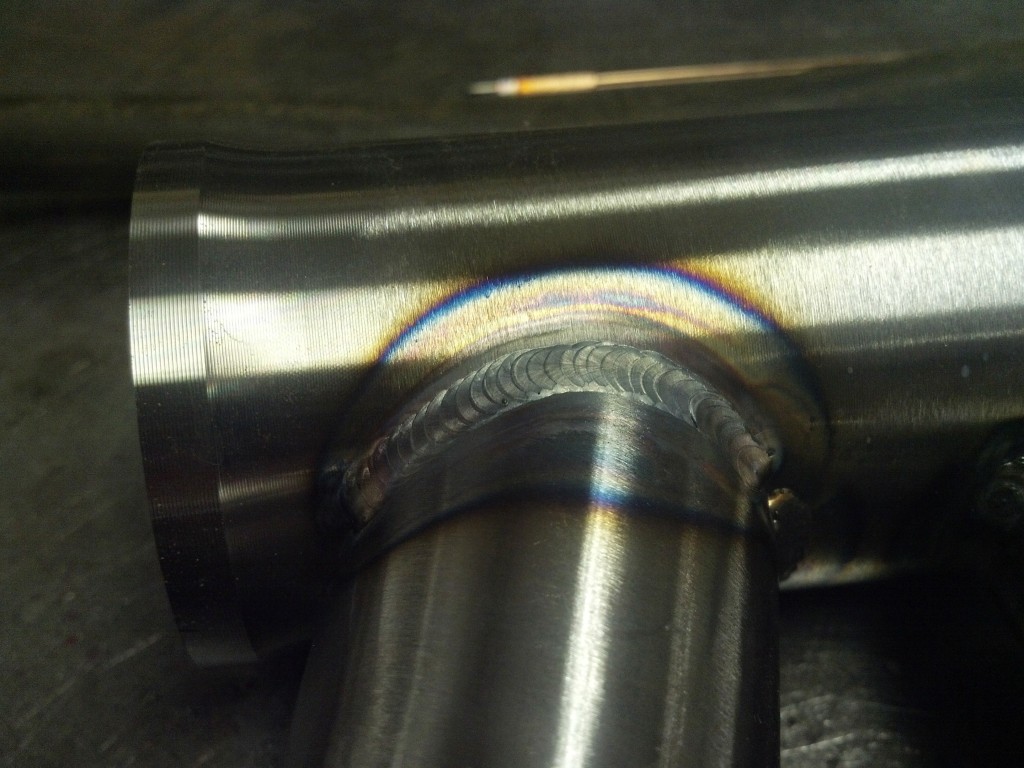 With the front triangle completed, we moved on to the seatstays and chainstays, welding them at the dropouts and bridges as completed assemblies. This entire process appeared to be totally uneventful…or so I thought…

Part 2:  Putting it all together

After our first welding session I once again holed myself up in my Dad’s garage and re-worked my jig so I could miter the seatstays and chainstays to meet the front triangle. I decided my best option was to build the jig upright. I visited Carl at Vicious Cycles and had him ream the 44mm headtube so I could install a headset and fork. I then built tube blocks for the axle on the fork and that, combined with my existing bottom bracket jig was how I would hold up the front triangle.

(What better way to make sure you get the head angle right than to install the fork first?)

With most of the prep work complete, our second welding session should have been a walk in the park (at least on paper). All we had to do was join the three sections together and add some final touches like a brake brace, disc mount, ISCG tabs and cable guides.

I was convinced the process would be so swift and efficient that I borrowed a seat tube reamer from Bicycle Depot and brought all my parts with me.

Me: “We’ll just finish it up, put it together and go for a ride!”

I had noticed earlier that my seatstays looked…crooked. I had made futile attempts to bend them straight, to no avail, and hoped that Paul may have some advanced method to fix it. He did not. 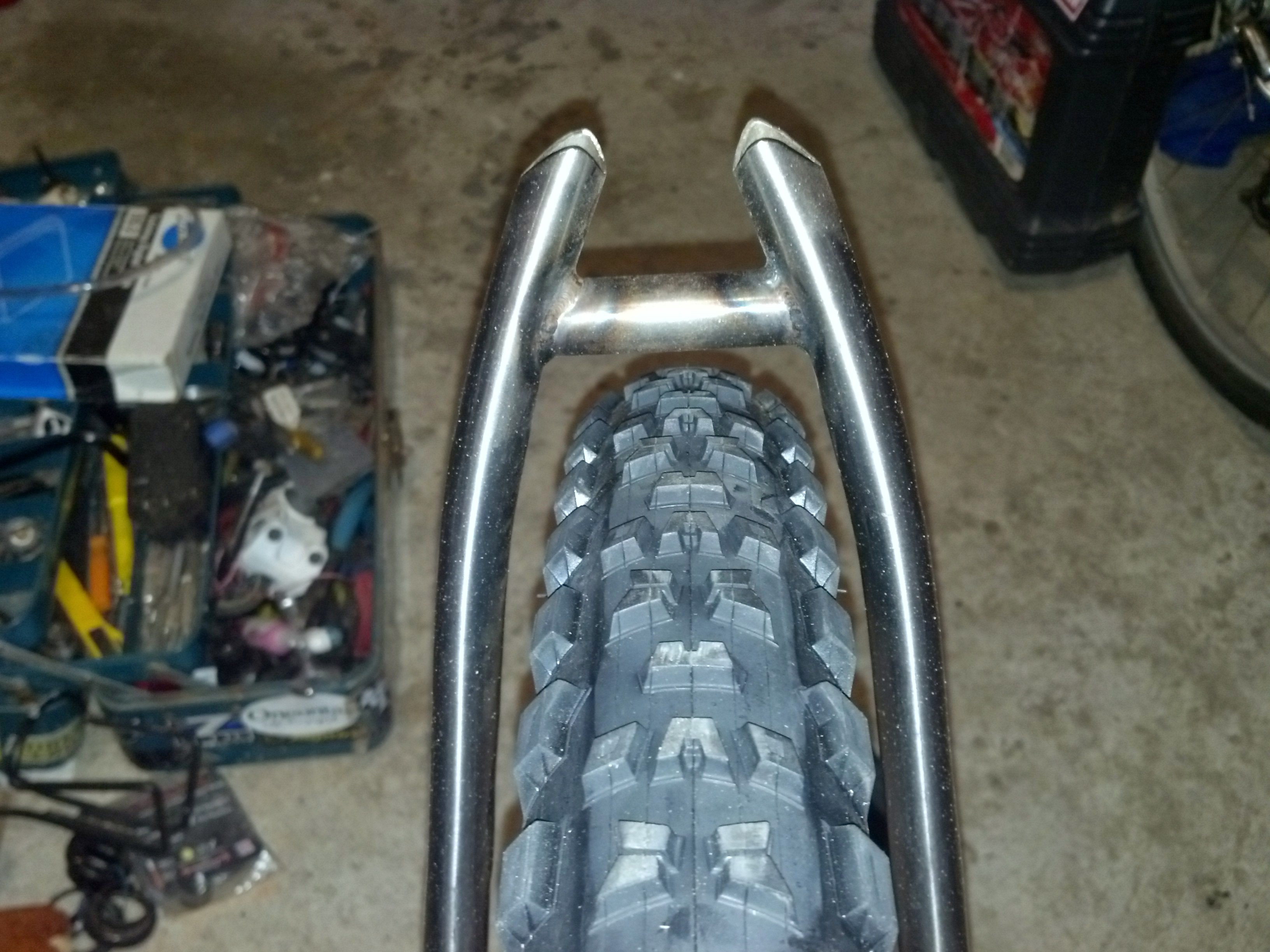 I ran through the 5 stages of grief in the space of 30 minutes and we decided to make attempts to bend them in the right direction, again, unsuccessfully. In the process of doing so, a small kink that I had inadvertently put in one of the stays during my previous efforts became rather sizable. Neither of us wanted to admit it, but we both knew the tube was ruined – doomed to fail once wheels hit dirt.

Next we spent close to an hour looking for replacements in the shop but couldn’t find any that matched my specifications. At this point we were hours behind schedule and hadn’t actually accomplished anything – attaching the chainstays was the first step in the sequence we laid out.

There was one last option to complete the frame and avoid a third trip to Binghamton. Somehow I accidentally ordered a second set of chainstays…but left them at my parents’ house in New York. Driving back there and then back to Binghamton would have been at least 5 hours in the car…so I called Mom and begged her to bring them down to Roscoe, roughly halfway.

Paul wasn’t too keen on the plan, but spending a third day off welding my shit for next to nothing sounded even less appealing, so he agreed. Fortunately, my parents are AMAZING people and were willing to help me out. (Love ya Mom!)

It was well past dark when we finally got back to the shop, and we still hadn’t gotten started. Right quick Paul cut out the damaged chainstay while I worked on mitering the new one for Paul to attach. Not long after we tack welded them in place, test fit a wheel and got it almost perfect.

From there, we were clear to attach the seatstays which required some final mitering. Then we cut and attached the brake brace, which was more difficult than it should have been due to issues with the welder.

By this time it was well past midnight and we still needed to add the brake brace, plus ISCG tabs and cable guides. I’ve known always known Paul was some kind of superhuman being – at 1am the thought of measuring and mitering the brake mount seemed totally unattainable to me, but he grabbed it and had the whole job done in short order.

I completely stopped taking pictures because I was completely exhausted. Even Paul didn’t look so great as he welded on cable guides at 4:30am. Yes, that’s correct…4:30am.

We finished shortly before dawn, completely spent, but with a rolling chassis. We chucked our shit back in the car and headed home, basically twitching with caffeine as we fought to stay awake. Somewhere in rural New York we pulled over and fell asleep at a rest stop. Neither of us had the energy to keep our eyes open.